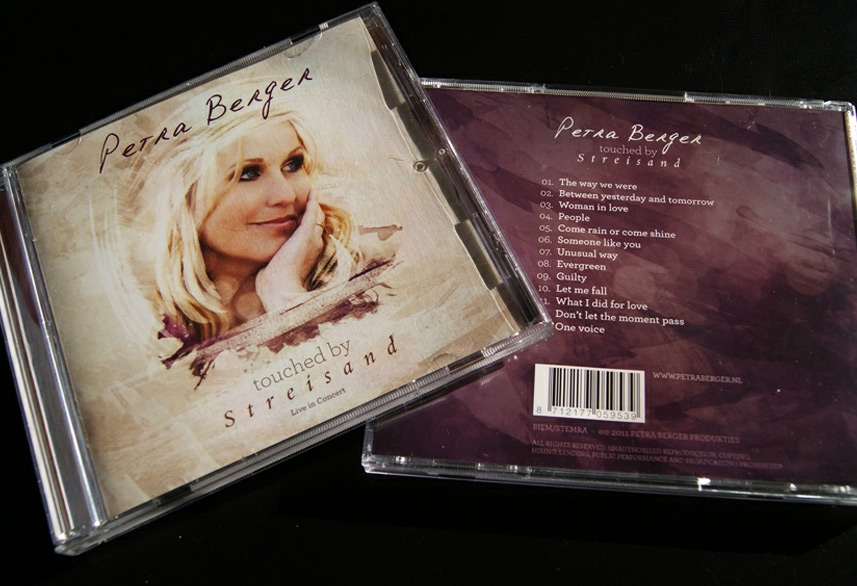 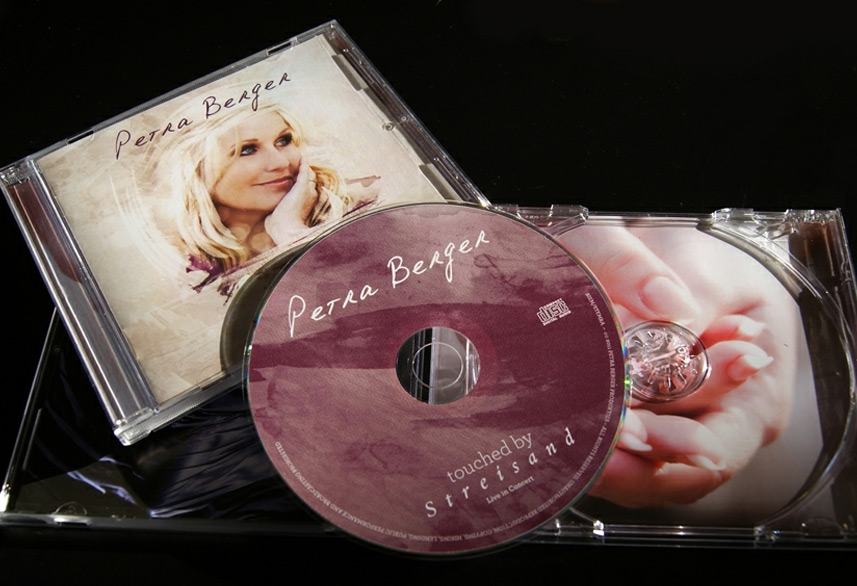 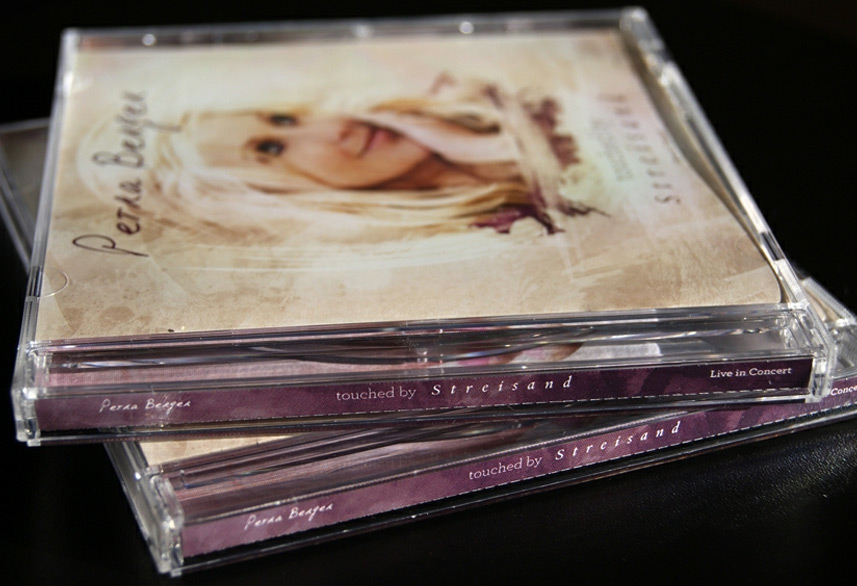 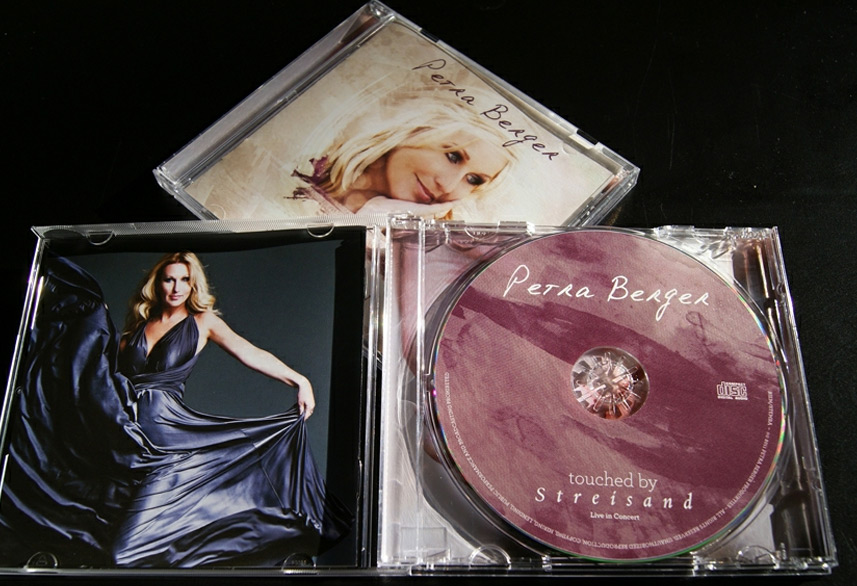 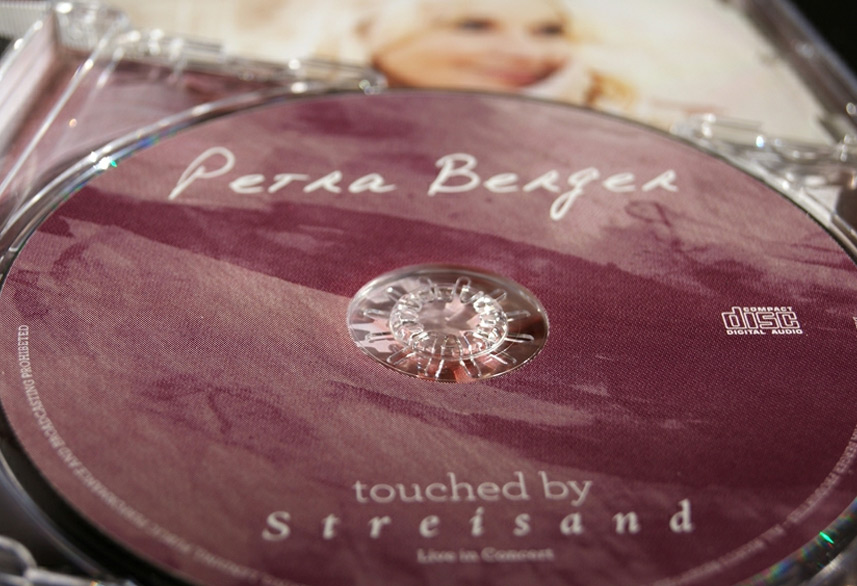 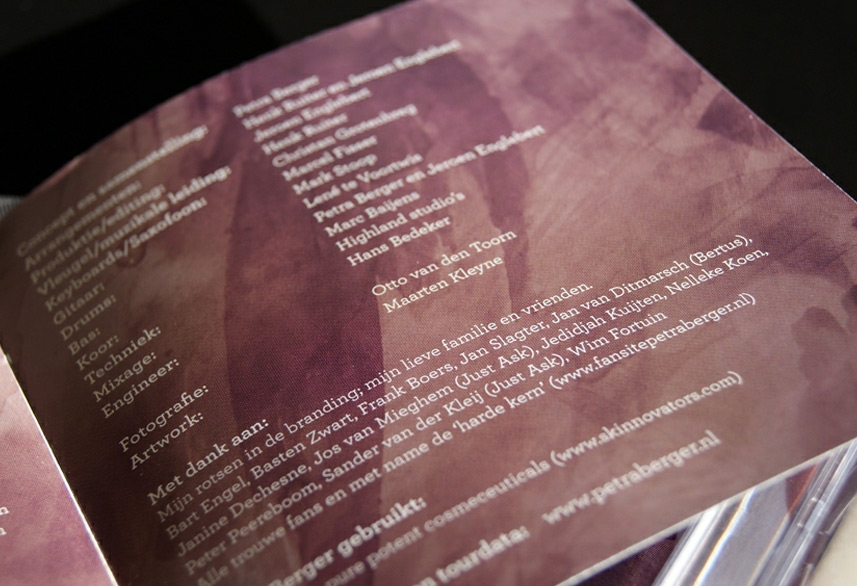 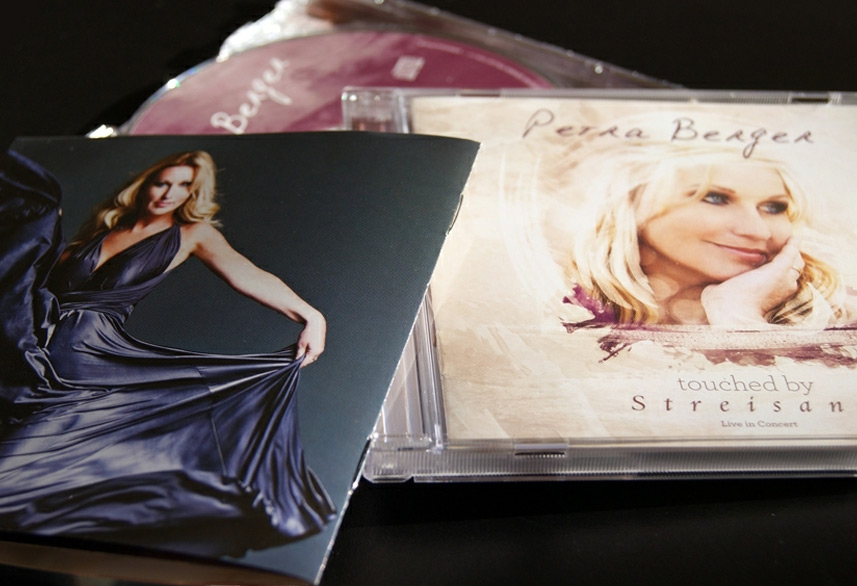 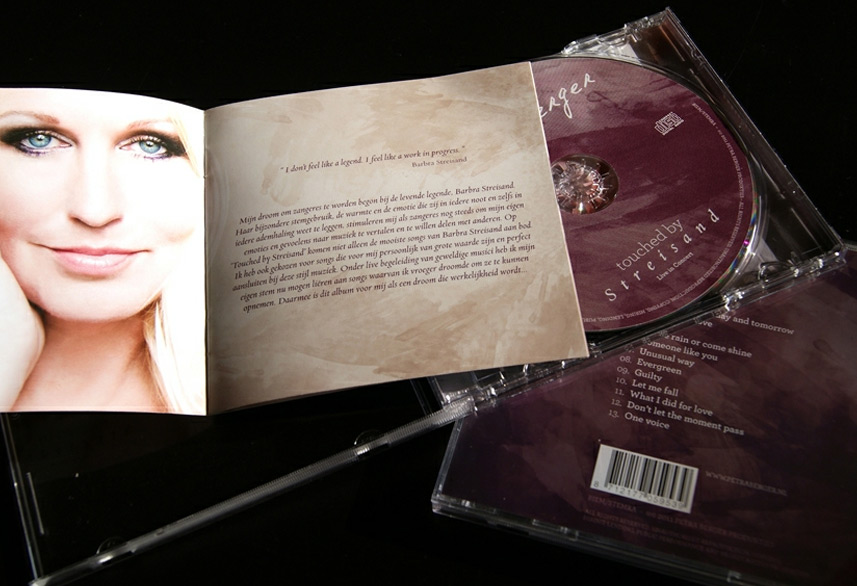 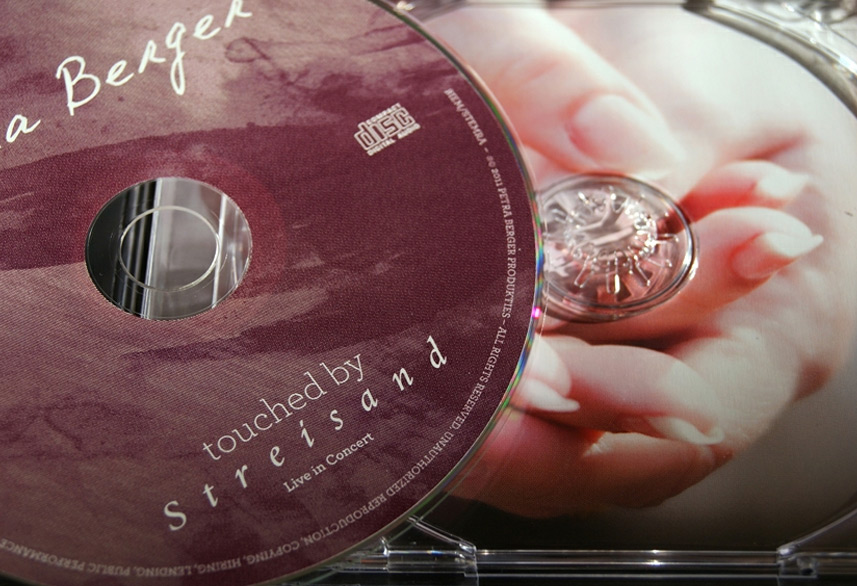 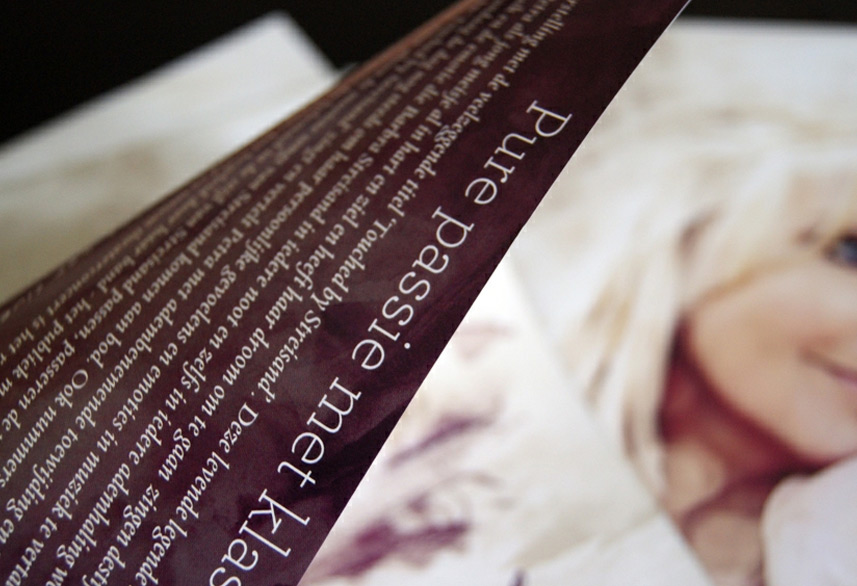 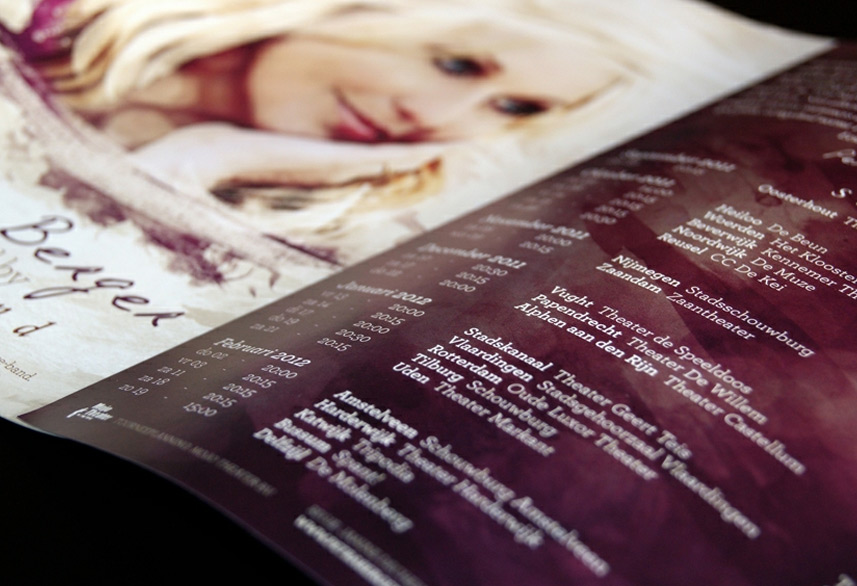 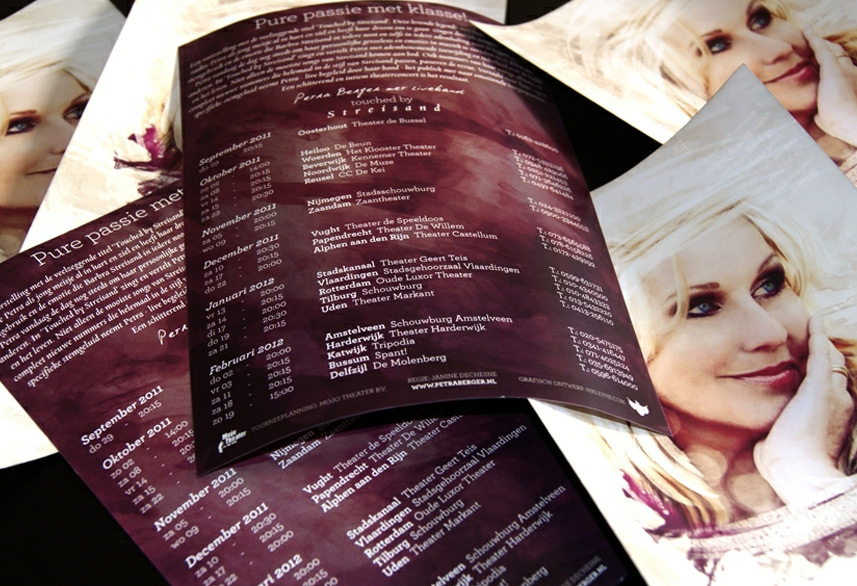 A while back I was commissioned to create the tour poster and promo-flyer for Petra Berger’s tour: Touched by Streisand. The artwork I made was so well received that they decided to use it for the album as well. These are the promo-flyer, tour poster and cd designs I made.

Petra Berger is a renowned artist from the Netherlands and well known in the opera/musical genre. According to her biography her vocal capacities are often compared to those of Andrea Bocelli and Céline Dion. With this new album her discography houses a total of 5 albums. Prior to the release of her new album she held a live concert on national television.

Designing this artwork was excitingly challenging in a couple of ways. First and foremost being the actual music and genre, which was a new territory for me. Another being the initial photograph I had to work with; a close-up of Petra in which parts of her head and hair were cut off at 3 of the 4 sides. I did however have total creative freedom because it started out as a pitch, which allowed me to come up with this result. While working on the artwork I focused on two terms of which I was told were key factors for the music of Petra Berger and her tour, namely: romance and dreamy.

When I started working on the album design and booklet I received an amazing set of photographs made by Otto van den Toorn, which were great to work with. So the album design was less challenging than the initial artwork for the promo-flyers/tour posters (and the front of the album).

It was an absolutely interesting project to work on. Knowing that these tour posters and promo-flyers were going to be hung and posted all over the Netherlands was quite awesome as well. I was mostly baffled by the A0 sized version of this tour poster, it was the first time I physically held a print I created on such a huge size. Considering that this project started out as a pitch; it truly went beyond my expectations when they told me they wanted to use the artwork for the cd packaging design as well.

For more about Petra Berger, her tour and the album you can visit the official website.